Home » Investigating the impact of heat pumps on the electricity grid

Both government and the Committee for Climate Change (CCC) have set out a clear commitment to the rapid decarbonisation of heat with the introduction of a future homes standard, mandating the end of fossil-fuel heating systems in all new houses from 2025.

Ambitious UK heat pump growth in line with these, and other, environmental and societal drivers is therefore expected, but forecasts have been met with concerns about the impact that widespread deployment of electrically powered heat pumps could have on the electricity grid.

In answer to these concerns, Kensa references a paper examining the impact of large scale deployment of heat pumps on national demand which was published in the international peer-reviewed journal, Energy Policy. The report found that the electrification of domestic heating on the grid is far less problematic than previously thought. These predictions, together with considerations of the way in which UK housing stock will evolve, advances in heating technology, and changes to the UK demographic, have far-reaching implications. It is predicted that over the next 10 years electricity will become increasingly important to the energy market.  The emergence of dynamic tariffs (which vary electricity charges depending upon the time of use), heat storage products, smart controls and, in some circumstances, battery storage, will mitigate capacity problems, and further enhance the cost and carbon benefits.

The rapid decarbonisation of the electricity grid over the last five years has added more momentum towards the electrification of heat. Concerns have been expressed that shifting load from fossil fuels such as oil, LPG and ultimately mains gas, will unduly increase the strain on the electricity grid beyond its capacity – particularly at peak times.

However, unlike direct electric, heat pumps produce more heat than the electric that they consume, and therefore actually reduce the load imposed on the grid. When using ground source heat pumps in particular, this strain is further reduced because they are typically 20-25% more efficient than air source heat pumps.

By using smart controls that learn the occupant’s preferences and building heat physics, it is possible to avoid the peaks of grid strain and shift load to the times when the grid can best accommodate it. Ground source heat pumps have far more potential to participate in load shifting initiatives than air source variants, as the ground is a very stable temperature heat source. This means the heat pump can be run at the same efficiency any time of day or night (unlike air source where the efficiency is lower when the outside air temperature is colder at night).

If you combine some energy storage local to the heat pump, it is possible to even further reduce the peak demand. This will have a dramatic improvement on the amount of further generating capacity required to meet demand and will facilitate the use of more intermittent generation (e.g. wind power) and steady state generation (e.g. nuclear). This means that ground source heat pumps transform from being a potential strain on the grid to becoming part of the solution. 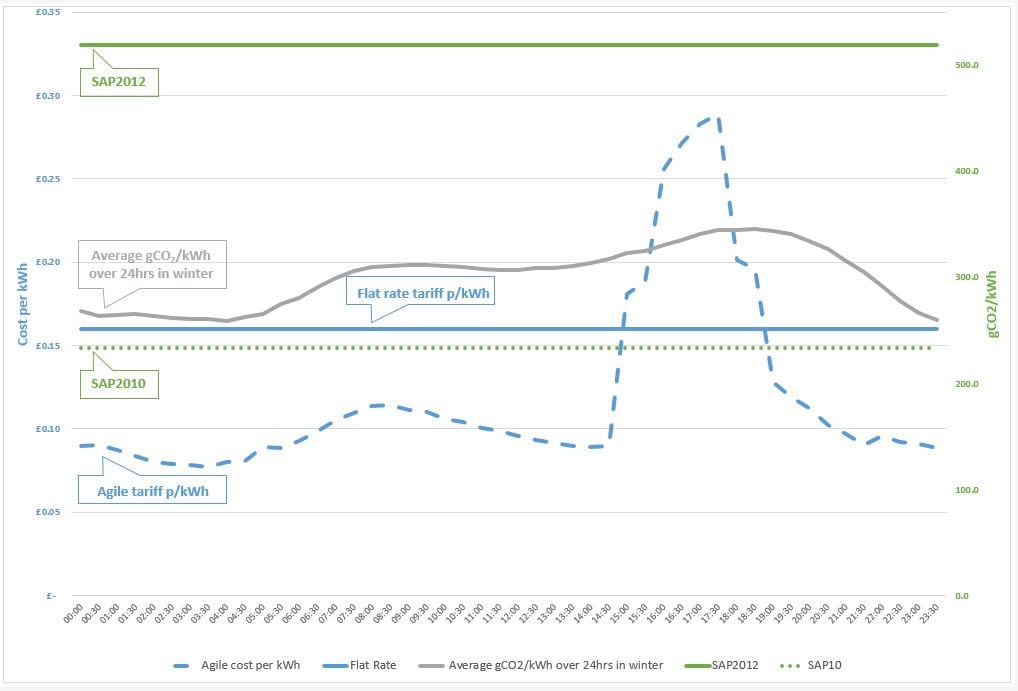 A prime example of how ground source heat pumps can be used with grid-scale energy storage and load-shifting initiatives is the ground-breaking Energy Superhub being built in Oxford. Earlier this year Oxford City Council declared a climate emergency and committed to improving public health and reducing citywide emissions by 40% of 2005 levels by 2020. The £41m project will accelerate a switch to electric vehicles and decarbonising heating for homes and buildings across the city, supporting the council in its journey towards becoming zero carbon. From 2020 to 2021, Kensa will manufacture ground source heat pumps for the Oxford project and install an innovative shared ground loop array system; allowing each household to have an individual Kensa heat pump connected to a larger ambient temperature district heating network. This will result in 25% lower running costs than traditional gas boilers, with half the carbon footprint.

Smart software will manage the energy trading and storage, as well as controlling the timing of the electric vehicle charging and ground source heat pump activation to maximise value to the end customer and reduce strain on the grid. This optimisation platform is expected to demonstrably cut heating bills and carbon emissions further than a standard ground source heat pump system without smart controls and automated load shifting. Smart thermostats will develop a tailored plan for each home based on its individual heat profile, taking advantage of time-of-use tariffs to shift heating demand away from expensive high carbon times, and make the most of low carbon, cheap off-peak power.

The University of Oxford will evaluate the performance of the system, and assess the environmental, social and economic impact on local stakeholders. Learnings from this project will support the roll-out of similar initiatives elsewhere in the UK, and around the world. Government plans to cut carbon emissions and improve air quality in the UK could see millions of electric vehicles and heat pumps in use by 2030, and this project will show how this can be achieved while maintaining a stable, efficient, cost-effective electricity network.

*Daily average cost and carbon graph: Base electricity charges based on Sheffield averaged on the Big Six once a month – average electricity cost per kWh (www.ukpower.co.uk/home-energy/tariffs-per-unit-kwh, www.nottenergy.com/energy_cost_comparison). Octopus Agile Tariff (average over 24hrs). Average CO2/kWh over 24hrs in winter (www.carbonintensity.org.uk)